Why We Sing of Calvary...

Today's thoughts are meant for people who know of churches, ministries, or schools that bear the name of "Calvary." It is for people who can think of songs new and old that sing of "Calvary" (like the sampling of songs at the bottom of the post). Knowing the horrible things that happened at that place, how can we sing of it? How can such hope and blessing come from such a cursed place referred to in the gospels as "the place of the skull"?

Now add this to the question: Since the word "Golgotha" appears three times more often than the word "Calvary" (which appears only once and only in the King James Version), why do we not instead sing of Golgotha? Why do we not see churches, ministries and schools bearing that name?
Perhaps you've never thought about this, but please take 20 minutes with me to learn why I think this is true. Twenty minutes? Couldn't you make it shorter, Mr. K? Please watch it from beginning to end. I think you'll find it interesting.

Since January of 2019, Enoch, a young man from China has lived with us. I'll  share more of his story another time, but in an interview with the Grand Haven Tribune a few months ago, he said to the reporter, "My life has been changed twice by Calvary: First by the Calvary in the Bible; and then by the Calvary in Fruitport."  Is a higher compliment possible?  The first Calvary is of utmost importance to mankind; the second only to those who have been a part of a small school. To whatever extent the latter reflects the life-changing power of the former, it too has significance.


(Double-click on video screen to enlarge.)

Notes: Below is more information for those who like to read more about things they have learned:

To believers, the word Calvary has great significance, yet if you go biblegateway.com and do a word search for "Calvary," you will get zero results in all of the commonly used translations. Only in Luke 33:22 of the KJV  (King James Version) will you find it. And that lone citing is owed to two things: first, the fact that Luke, a doctor, used a specific Latin word (for cranium) where the other three gospel writers used the Hebrew/Greek/Aramaic word (for skull). And second, the fact that St. Jerome, while translating the New Testament into the Latin Vulgate in the 4th Century, saw the significance in Luke's word choice and preserved it. More than 1,200 years later the translators of the KJV did the same.

The Latin "Kranion" is often translated as Skull in English, but more accurately it means Cranium, the part of the skull enclosing the brain. In Latin Kraníon is rendered Calvariæ, from which the English word Calvary derives. Had Luke not used that Latin term, we would have no "Calvary" in the Bible.

Both words are clear in meaning and the word meaning "skull" is used three times more often by Matthew, Mark, and John than Luke's single use of the word meaning "cranium." So why is it that in the post-Reformation centuries of song-writing that the word Calvary and not Golgotha is used in lyrics? (The difference is about 100 to 1. Why?)

I have have wondered about this question for years. Is Calvary simply a more pleasant word? Is the word Golgotha unpleasant?  I feel like that is true, but why?  I've created this comparitive outline to reflect what I think is the connotation of the two different words that refer to the same place.

Is it possible that the word “Golgotha” just sounds ominous because of the harsh "G" sound or due to negative associations with the root word, GOTH (meaning "skull")? Are the images evoked by all forms of that word imagined or are they at the heart of the very word itself? In my opinion, the obvious answer has gone unnoticed through 20 centuries.

While trying to confirm that the same root meaning has slithered through the centuries, I learned, for instance, that the origin of the name given the "Goths" in northern Europe is unknown. But this article "Who Were The Goths?" explains that they were barbarious tribes that dabbled in dark arts. It also mentions that even in real time "Gothic architecture (Notre Dame Cathedral) was described as Gothic due to its inclusion of barbaric images (gargoyles).

In this video, I did not mention a whole genere of gothic literarture because I used to teach literature and this would have added much more content, but for those who want to know more. The Gothic Literature movement came four centuries AFTER gothic architecture, but it deliberately played on the same dark themes abd introduced vampires and other monsters. Mary Shelley's novel Frankenstein, is an example of Gothic Literature.

So... whether or not others are willing to make the connection between the barbaric nature of the "Goths" and gothic architecture and the darkness of gothic literature the root word gal-GOTH-a meaning "skull," I have made that connection because that root word was nearly identical in Hebrew/Greek/Aramaic languages in use throughout the rise and fall of the Roman Empire (which overlaps with the time of the Goths).

Whether or not I can prove the connected dots touched on in this video is secondary to the fact that the conotation and sound of the word Golgotha has been clear from the time of Christ until now, and that alone makes a case for the answer to the title question. 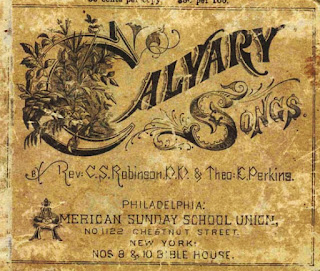 Furthermore, the evidence that Christianity has been drawn to the more positive use of the word Calvary (over Golgotha) can be proven by thumbing through any church hymnal.

What do you think? Feel free to comment below.

I hope you were able to set aside 20 undisturbed minutes to watch the video and see if this short exploration does not bring clarity to why we say Calvary. And if, like Enoch, you happen to know the significance of both the Calvary of the Bible and the Calvary in Fruitport, MI, you will want to watch the video to the very end.


"I Believe in a Hill Called Mount Calvary"

"Up Calvary's Mountain"
(According to this source, This 100-year-old hymn's musical theme comes from Handel's Sarabande .The text comes from Avis Christiansen and matches the tune well. The switch to D major permits a newly composed melody to emerge, one of assurance. Returning to Handel's strain, the piece ends in strength and praise.)

Lead Me to Calvary Jennie Hussey, 1921

"Calvary Covers It All" by Hillsong

"Calvary Covers It All" original hymn by E. R. Taylor (as churches sang it for 80+ years, 1934. Ethelwyn Robinson Taylor and her husband Walter ran the Pacific Garde Mission in Chicago, IL from 1918 to to 1936.)

"The God of Calvary " by Chris Tomlin

Through the centuries there has been little mention of Golgotha in the Hymns of the faith.  In fairness, I did find one new song about Golgotha by Crowder. See if you dont agree that it actually underscores the thoughts of this video. It chooses to focus on the place, the pain, the punishment of Golgotha, but it also gives one mention of the word Calvary which echos in the refrain: "You can't stop love." I can't imagine a congregation singing this song, but I include it only as further proof of the contrast between the two words: Calvary and Golgotha.