In the city of Waterloo, Iowa, just two blocks from the Christian school where I served for 18 years, rests the large granite boulder seen in this picture.

It has been a point of interest in Waterloo since the first dirt road went past it more than 150 years ago. Over the decades, the expanding town grew around that rock. When the dirt roads became paved in the 20th Century, engineers tried to remove the rock, but they discovered that there is more of it below the surface than what is seen above. Its actual dimensions are unknown, but the exposed portion alone would weigh well over 100 tons.

When the two lane road became four lanes, a portion of the bolder was blasted away to create legal distance from the curb. Since that time the city engineers have left the rock alone. Rising as it does from Iowa’s soft loam with no other natural granite features in the area, it has become a landmark, an erratic remnant from a time much closer to creation and the climate changes that followed the Great Flood. The boulder at the corner of West 4th Street and Ridgeway Avenue, will be there when all around it fades away. The rock won’t move.

One of the most powerful Biblical images of our steadfast God is that of a rock—not a small stone—but an immense and immovable rock even greater than I have described.

I Samuel 2:2 says, “… there is none besides you; there is no rock like our God.” And II Samuel 22:47 adds, “…blessed be my rock, and exalted be my God, the rock of my salvation.” Deuteronomy 32:31 confirms this exclusive attribute: “For their rock is not as our Rock; our enemies are by themselves.”

The God as our Rock metaphor is made even more vivid when put to music. It is echoed more than 20 times throughout the Book of Psalms: “6 He only is my rock and my salvation, my fortress; I shall not be shaken.7 On God rests my salvation and my glory; my mighty rock, my refuge is God.” Psalm 62:6

More than 2,000 years later, the image of God our Rock continues to find its way into the songs of believers. “He hideth my soul in the cleft of the Rock” (Crosby, 1890) comes from Exodus 33:22. “Oh, Jesus is the Rock in a weary land, a shelter in the time of storm” gives voice to Isaiah 32:2, put to music in 1885. And children have been singing “Jesus is the Rock of my salvation” for decades.
One of the newest worship songs using the God as our Rock image was written by a young worship leader named Tyler Miller and his fellow members of VerticalChurch Band. It’s one of those songs that incorporates a refrain from an old hymn: “On Christ the Solid Rock I Stand” which was first published in 1836. I appreciate it when new songwriters “back-stitch” with lyrical threads to reinforce the generational fabric of our faith and pay homage to the gifts of saints who have gone before us. Here is the song:

Enclosed in this month's Newsletter mailed out to 600 homes is a small booklet i wrote called: “Roots around Rock: Teaching toward Ideals in a Less-than Ideal World.” Copies are also available in the CCS office.

Last month I wrote some thoughts about roots; this month I wanted to focus on The Rock.
The closing pages of that booklet summarize some thoughts about Biblical ideals by saying, “Ideals…are not just lofty words or feel-good maxims. They are not stepping stones conveniently placed along some garden walk.” 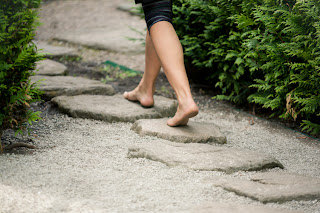 Stepping stones are put in place by man to help him walk his self-made path. This is not true of Biblical ideals which, like their source, “are immovable boulders deep in the ground, exposed over time in the grip of roots…and forever bound through the ages. They line the rugged, narrow path from where we are to where we know we ought to be…”

On the cover of that booklet are pictures of massive boulders held fast in the grip of roots of a towering tree above, but the words of the song above describe a paradox which must be affirmed: While it is true that we strive to be rooted in and holding fast to the Truth, it is more importantly true that the Rock is holding tighter still to us. 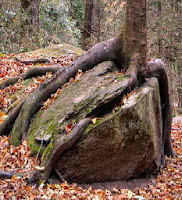 What a humbling and reassuring thought that is in this season set aside for praise.