I was in second grade when President Kennedy was killed

Because this coming Friday, November 22, 2013, is the exact 50-year anniversary of the Kennedy assassination, you may be seeing many special programming or articles in the media. So I thought I'd post this blank-verse piece I wrote several years ago.

Just as the attack on Pearl Harbor was to my parents, and as the events of 9-11-2001 are to this generation, the day President Kennedy was killed is a moment frozen in the minds of many Baby Boomers who may now be age 55 or older.

"Wooden Box" was an attempt to recall how it felt as a second grader at Huron Park Elementary School in Roseville, Michigan, to be flying from a swing at recess one minute and then shrouded in silence the next. The title reflects the wooden speaker on the wall from which we heard the news, the wooden desks that held our silent heads, and the wooden casket we later saw on a black-and-white screens of the wooden consoles of televisions from that day. May we as parents and teachers be ever aware of the indelible impressions our children form during times of crisis or loss.

The shrill chirp of a whistle

drew us running to our lines,
but just as it should blow again
the recess lady stepped inside,
and left us standing
in November's cold.
No second whistle blew.
Instead, a hand beckoned
from the doorway
and we entered single file.

Outside each classroom
the teachers' faces were
more sullen than stern.
“Heads on your desks,”
mine whispered as we passed.

"Heads on your desks"
was never harsh;
as always after recess
it was her way of saying,
"Hang up your wraps
(as teachers back then called our coats).
Don't talk. Settle down from play.
Let your feet forget their running.
Let your hands let go
the cold steel of monkey bars,
merry-go-round, and ladder slides.
Let your ears erase
the squeaking drone of swings
and chalky chants of hop-scotch girls
and jump-rope songs and
'teeter-totter, bread and butter'
echoing to the hill. 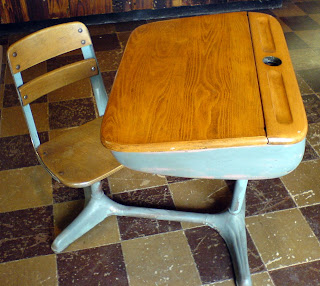 Let your face feel the smooth,
warm wood of your closed desk.
Listen to the quiet breath
inside your pillowed arms
and find a space inside your mind
to put the final lesson
of this day.

There was nothing unusual
about hearing her say
"Heads on your desks,"
but she'd never whispered it before.

From the wooden box
above the blackboard 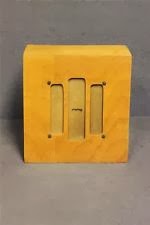 came a strange and distant voice.
It was not the principal but was, in fact,
a radio broadcast piped-in to every room
from his office “P.A.”
Soon the somber words and phrases
seemed to settle in the room
so that even a second-grade boy
with his head on his desk
knew why his whole school was
suspended in silence
but for the wooden box:

Sniper. Dallas. Fatal shot.
The strange voice
left no room for doubt.
The president
of the United States,
John Fitzgerald Kennedy,
was dead.
Assassinated,
a word I'd never heard before.

One by one, eyes rose
in puzzled understanding.
Our teacher paced the room
and touched the heads
of those with questions.
Her tender voice helped pass
the helpless pauses in the news.
And when a priest
(from where they rushed him)
came on the air to pray,
she walked up to her lesson book
and bowed her head.
We knew to do the same.

Closing my eyes I saw
she did not cross herself
as some around me did.
Hard against her upper lip
she pressed a crumpled hanky,
and her shoulders shook
a little with each breath.
Closing my eyes
I saw...

Once day was done at school,

we walked in twos and threes and fours
to street corners where
“safety boys” with outstretched arms
kept us till the traffic cleared
then scurried us along.

It seemed at first 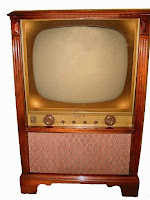 that not a thing had changed.
The sidewalks that we knew so well
still wound the same way home.
But that day more than most
mothers stood
waiting on front porches;
TVs flickered in the corner
as tables were set for supper;
and fathers coming home from work
sat a little longer in their cars,
trying to recall the things
dads are supposed to know.

In three days' time,,
we saw the widow veiled in black
with two children at her side.
We watched them say good-bye
at the cathedral steps.

From there the horse-drawn caisson
bore the wooden box
to Arlington.
We winced at the three shots
of the soldiers' seven guns.
We watched them fold the flag.
We heard the broken note of taps
and the final nine that fill the sky,
"All is well, safely rest, God is nigh"
Then in farewell,
the lady laid her face,
as we had on our desks,
against the smooth, cold wood.

John-John Kennedy salutes his father's casket as
it passed toward Arlington. November 25, 1963.
Posted by .Tom Kapanka at 1:14 PM