Sometimes…
it’s the little things
like putting in the extra leaf
and keeping window watch;
then taking covered dishes at the door;
and hugging through coats
that bring in winter’s air.
Staring fondly at the face
come furthest home;
laughing with the funny uncle
in the kitchen;
holding hands once large and small—
but ever more alike—
around the laden table;
and smiling at the changeless gaze 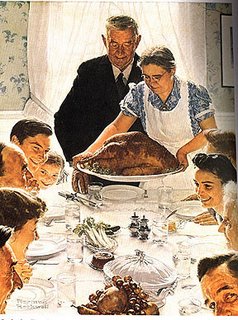 (framed on the far mantle)
of one not there to pray.
It’s the little things
that make Thanksgiving.
The tastes and smells
and long-awaited feast
at best are just
the garnish of the day.
It’s the enormity
of little things
providentially in place
that lumps our throats
and lifts our thoughts
…at grace.
© 2006, Tom Kapanka

Lord, we thank you for Calvary Christian Schools. We thank you for meeting our needs through the years and for the hope of continued blessing for years to come. We thank you for the folks at Calvary Church whose vision through the years provided a foundation for changing times and paradigms we now face; for the more than 120 homes in our school family; for the 45 new students who joined us this year (with another joining us next week); for the outward focus and service opportunities that have helped us earn the good-will and trust of our community; and for our faculty and staff whose steadfast service puts flesh and feet to God's Word in this place.
Praise God from Whom All Blessing Flow!
Wishing you and yours a wonderful sharing of thankful hearts this week.
Posted by .Tom Kapanka at 9:50 AM No comments:

Sadie Hawkins is This Friday

See Update at end of this post:
About ten years ago, CCS started the Sadie Hawkins Party tradition. For some it is a "reverse courtesy" event to which the girl can ask the boy. But for many of our students it's just a great "group of friends" event with a special theme. Last year was "Night at the Museum" (click on that title for more details). Six years ago it was a hoe-down in a barn. One year it was "South of the Border." This year, the theme is "Back to the '50s." So there will be lots of poodle skirts, penny loafers, greased hair, etc. The night includes dining at the very retro "Dog and Suds" drive in on Old Grand Haven Road. We've got the whole place to ourselves.

This is not the first time we've gone with a "Fifties" theme. The last time we did, I blogged about it the next morning, and the headline read:

My Wife Got Pulled Over for Drunk Driving Last Night!
Here's part of that post from 2007:

We'd been partying all night, it's true. Doing crazy things that, frankly, people our age rarely have the energy to try. We felt like a couple of teenagers again and stayed out way too late. It was about 1:15AM, to be exact. It was fun, but we were worn out. As always, we were the last to leave. Lights out. Doors locked. All we had to do was drive safely home.

Julie and I were in separate cars. [Natalie was in 7th grade at the time and had been staying at a friend's house. Julie stopped by to pick her up. She had fallen asleep on the couch and just piled into the front seat bundled in PJ, a winter coat, and a knit stocking cap with flaps with her knees up on the dashboard.] I was a few minutes ahead of Julie on the road home when she called me on my cell phone.

"Hey, Tom, you might want to come back here. I just got pulled over."
"By a cop?" I asked, as if "pulled over" has many cultural nuances.
"I think so." she whispered.
"You think it's a cop? Why did you stop if you're not sure it's a cop?" 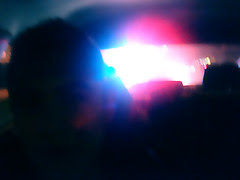 "I'm pretty sure... I mean there are red and blue lights going around and I'm squinting in the rearview mirror because his lights are shining so bright at the car, but I'm going to stay on the phone until I see his badge. Here he comes."
I heard the window roll down. Julie was first to speak.
"Hello, Officer, is everything all right?"
"Ma'am, were you on your cell phone while I was following you?"
"No. I didn't even know you were back there until you turned on the siren-light thingy. Then I called my husband because you didn't come out of your car and it was making me nervous."
"Well, Ma'am, you make me nervous..." Click... Silence.
Julie had hung up her cell phone in the middle of the policeman's sentence. It was an attempt to look less suspicious. Julie has never gotten a ticket in her life--that's right... never. Not one. I knew that would definitely help her case.
Speaking 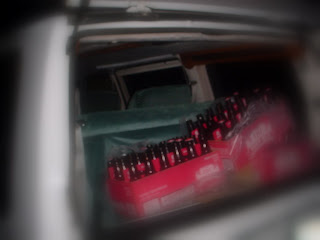 of cases. Come to find out, "cases" was the problem-- the cases of empty brown bottles in the van’s rear window.  I had not stacked them high above the window line and that Julie had not been driving with all the inside van lights on. (She does that when she's driving a van late at night in case someone is in the car. She wants to see if she's going to get attacked from behind. That make sense =)
We had purchased six cases of IBC bottled root beer at Sam's Club for the Sadie Hawkins party as part of the whole "retro" atmosphere.
There was no school the next day, so the party was late by design with the last part being a big-screen Fifties movie, popcorn, and root beer floats back at the school. ANYWAY!.... After the party, Julie and I and the

seniors cleaned up the gym, and I carried the cases of empty IBC Root Beer bottles out to our Astro van.
I enjoy knowing the history of cultural things. Did you know that a hundred years ago when pop was a drug store "soda fountain" item the brown bottles were used because light shortened the shelf life of their product? That's why  "retro" root beer brands go for that look.
As naive as this may sound, it did not occur to me that stacks of empty brown bottles in the back of a van after 1:00 in the morning might make a police officer think the vehicle is swerving a little more than it really was.
"Where are you coming from?" the policeman asked.
"A party." Julie said blankly.
"You better explain that..." Natalie muttered from under her coat and cap.
The officer shined his flashlight on our 12-year-old daughter who looked like a kid-napped, homeless midget.
"Is that your child?" the officer asked.
Julie smiled and explained the whole evening right up to my loading the bottles in the van... and then her eyes lit up. "Oh, you saw the bottles in the back window. That's why you pulled me over, right?"
"They caught my eye, Ma'am--especially at this hour of the night. I could go the rest of my career and not hear an explanation so opposite from what I was thinking... but I need to see your license just the same."
He ran it and must have been impressed that a lady of... well... nearly my age (though she looks much younger--especially in a poodle skirt)... has never had a single ticket. He simply walked back to her window, handed her the license and said, "You have a good night, Ma'am."
I am very grateful for the men in blue who take no chances in such matters. There is nothing funny about people who drink and drive, but I’m sure he had a laugh telling the story (as I have telling it since!).

That officer was not the first man to be "won over" by Julie's disarming charm, calm smile, honest voice, and good clean livin'. I was, too...
nearly thirty years ago!


Originally written in 2007. We'll be more careful with the root beer bottles this time, but we're looking forward to another Sadie Hawkins!
Update 2011: Friday night's event was great poodle skirts, white socks, rolled-cuff jeans, saddle oxfords, and slicked back hair all around. We began with a scavenger hunt (Sophomore Class won), then ate at the very retro "Dog and Suds" (it looked like a scene from "Happy Days"),and then went ice skating (whole place to ourselves). There were some outstanding skaters as well as first-timers. (Kudos to Gage Berg for being an inspiration to us all!) And then back to the school for ice cream sundaes and trip back in time to Mayberry. Perhaps the truest reflection of the event was all the happy banter on Facebook the morning after. What a wonderful time of Friday night fun and fellowship for 50 Christian kids!
Posted by .Tom Kapanka at 6:36 PM No comments:

Tonight was our our first-ever induction ceremony for NHS. I was there as a parent (Congratulations, Natalie!), but I was also asked by Mrs. Borgeson, the faculty advisor, to share some closing remarks as the school administrator. I had first written these thoughts a few years ago, and they seemed appropriate to share with this group of students, parents, and grandparents. Rather than read the piece, I thought I'd put the lines in video clip to see if the message could be of use to others beyond this evening.