Please Send Our Roots Your Rain

The ground is clumps of hard and crackled clay
where creeks and ponds and puddled mud once lay
in meadows draped in a purple haze
of cocklebur in bloom. Gone are the days
of soft, dark loam when just as spring's begun
the plowshare sliced from morn to setting sun.
Too long the wind and weathered walls
have whispered in the empty stalls
of barns and whined at windows in the night
where just beyond in the flickering light
a shadow prays…as another sighs,
and with calloused hands against their eyes
they plead again in soft steadfast refrain…
“Ours, O, Lord, yes ours… please send our roots Your rain.”
Tom Kapanka
©Begun 1-26-12;/ completed 2-8-13 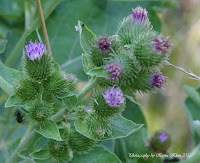 Two summers ago, while visiting Julie's folks in Kansas in July, I was in the car with my father-in-law. Many farms in that part of wheat contry still have the remnant of a barn with gaps between the boards that let in light and wind, but they are typically still maintained by someone no longer living there.

I saw rolling hills of cocklebur and said something about the purple cast they gave the landscape. My father-in-law told me the weed was an invasive species that takes over acres and acres of pasture, leaving them unfit for crops or livestock. He pointed out that the fields I was admiring were once good farm land but had gone feral many years ago. I had heard that term applied to wild animals (like cats found in abandoned houses) but never to land, and it made me ponder the farmer's plight: even in the best of times he struggles to keep the growing things he wants from those he doesn't--to separate the wheat from tares, so to speak. He knows that, left alone, the weeds win. That much he expects as part of life and Eden's curse. But there are other times, times of drought, when even the daily struggle of separating good from bad is lost for lack of rain, and in such times he is reminded of his total dependence on God. This is hard for farmers because they are problem solvers who believe hard work gives hands their worth. 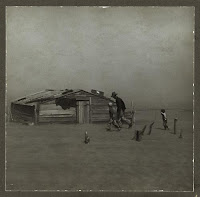 Note: This post was originally published here in February, and it remains in that February 2013 space. It was re-posted in October to follow the post about roots.
Posted by .Tom Kapanka at 8:53 AM