Revisiting the Meaning of Neighbor


One time Jesus was talking to a lawyer who had heard him summarize the Ten Commandments with “Love the Lord your God completely AND love your neighbor as yourself.” The lawyer had a follow-up:

Wouldn’t life be easier if Jesus had said, "Your neighbor is any person whose primary residential property is contiguous with your own and perpendicular to the street of address." Loving “next-door neighbors” unconditionally would not always be easy, but the duty would at least be limited to a few occupants of two homes. Hard as it would be to love all next-door neighbors "as yourself," Jesus makes the task even more daunting by dropping the "next-door" part and completely re-defining the word neighbor through a story.

You know the one. It's called the Good Samaritan, a parable of unmerited kindness in an atmosphere of prejudice. As a creative exercise (not an attempt to "improve" upon the original in God's word), a few years ago I took some liberties and wrote a paraphrase set in New York City. I think it may serve as a good reminder that our Lord does not ask us to be "neighbors" only to those who share our beliefs but also to those whom he brings into our lives through circumstances beyond our control. In a different part of Scripture, we are reminded that sometimes we are interacting with angels unaware. How we treat those we are most inclined to avoid or not want in our midst says much about our progress as followers of Christ. So here's a modern retelling of that old parable:
.................. ............................................ ...................

The suburban lawyer was glad to hear Jesus talking about loving his neighbors. He liked Joe to the south and Jim to the north—they got along great, but he wanted to make sure it didn’t include Josh on the back lot line. Josh was a jerk. He once cut down a Scotch Pine that was in this lawyer’s lot and all he said was “Sorry I didn't ask, but my dog kennel needed some sun.” It was that blasted dog kennel and the ugly mutt inside that the lawyer wanted most to block with the bushy tree, but he let it go. Oh, how he hoped Jesus’ answer only meant “next-door” neighbors on the same street. 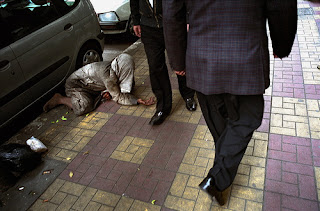 But Jesus threw him a curve. The story had nothing to do with houses or lot lines. It was about this man who got knocked out, and robbed on a side street in New York City. He was lying there like one of those homeless guys you try not to look in the eyes.

Most of the passers by had learned how to step aside without looking down at those awkward glances, but some crossed the street because he was moaning and reaching out for help.

One man thought, “I can't tell if he's drunk or hurt, but I’m not getting close enough to find out.”

“I’m not getting involved,” another thought, “Last time I did I had to be a witness in court. ‘I know nothing... nothing,’” he said in a German accent. (He was actually Italian, but he loved that line from Sergeant Schultz on Hogan’s Heroes.)

Then this “red state” rancher comes walking along in a cowboy hat and boots. He was in New York on business, a trip that had flopped the second he walked into the client’s office 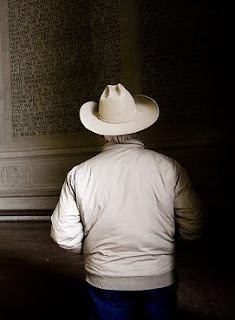 with his Southern accent and a “Support the Troops” button on his lapel. So he cut the trip short and had a few hours to see the sights before his flight.

Everywhere he goes people stare at him. It may have been his bow-legged gate. It may have been the puzzled smile he returned to folks with pink and purple hair who snickered at his hat. He walks by some protesters on a corner and one of them screams "Accept Me," shaking a sign so close to his face that he can't read the words. He simply tips his hat and says, “Much obliged, Ma’am,” thinking to himself “Toto, We’re not in Kansas anymore.” (He was actually from Texas, but he loved that line.)

Then he comes upon this beat-up man by the curb and quickly stoops down to help. He takes a bottle of water from his coat and a bandanna from his back pocket. As the blood's wiped off the fallen man's face, he looks up and whispers,"Gracias." It’s clear that there are no serious injuries and the fallen man insists on NOT going to the hospital and NOT calling the police. The Texan fully understands what that means. Being from San Antonia, he knew the confident look of his Hispanic neighbors and the skittish look of their visiting friends who came and went with work. So he helps up the raggedy man and walks him down the block to the fine hotel where he was staying. 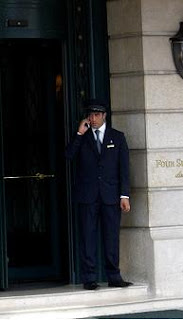 The regal doorman stopped them. “Sir, he can’t come in here.”

But the Texan said, “He’s with me, and my room’s booked for another two nights.”

The Mexican man smiled as they crossed the grand lobby and the kind stranger approached the front desk.

"I'm registering this gentleman to stay in my room. I won’t be needing it. He could use a hot bath and some rest, room service meals—and how ‘bout one of them back-rubs the brochure talks up. He’s kinda sore. Oh, and some clothes from that men's shop there—which by the way doesn't even know what a Stetson is. And if he wants it, a train ticket to anywhere he says. Put it all on my card. Here’s my cell phone number. Let me know if he needs anything else. Now…could you please call me a cab. I have a plane to catch.”
. 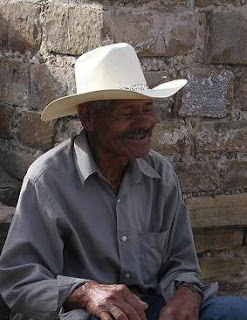 Turning to leave with a smile, he gave his new friend his hat. A few days later the man was feeling fine. He sat a long time at the top of the hotel's back stoop before beginning his walk to Grand Central.


It was a short story using the things most familiar to his listeners, and after telling it
Jesus paused and asked, “Who was neighbor to the man?”

The lawyer answered. “The one who picked him up and helped him without judging or asking what he already knew.”

“Good answer. I call it showing mercy. Now you go and do likewise.... even if a guy cuts down your Scotch Pine.”

“Yes, Lord. Hey... how did you know about my pine tree?… Oh, yeah, I forgot,” he said sheepishly as Jesus put something in his hand.

"Here's the penny for your thoughts."
(He was actually omniscient, but he loved that line.)
.
[Author's note: Why NYC? Because they have a "Good Samaritan" law that gets its name from the Bible story and stems from a similar real-life incident in which many eye witnesses refused to offer help a person in need. Why Texas? Because I think people in "red states" (more conservative states that tend to vote Republican--especially those in the south) are often treated by northern more-liberal elitists as "red necks" and bigots, an attitude which is as bigoted as any other form of prejudice. Why a Mexican? Two reasons: They are our neighbor to the south and in some respects our neighbors in need, but the story could have included a refuge from the Congo or a new arrival from an Arab country or any other person toward whom the passers-by have visceral feelings of rejection (because that was an important part of the original story; and second, I wanted to use the word "Gracias" which shares its roots and meaning with "Grace," and that one word is what this story is all about.]
Posted by .Tom Kapanka at 1:18 PM