Heart and Hand Together in His Plan

In Genesis chapter one, we read: 26 Then God said, “Let us make man in our image, after our likeness....27 So God created man in his own image, in the image of God he created him; male and female he created them."


Imago Dei: "The Image of God." The meaning of this term has been explored by theologians through the centuries, but one of the commonly accepted "image of God" attributes given to man is that he is creative at a conceptual level. This gift is most often seen in the arts--whether it be the aesthetic elements of the fine arts or the inventive and functional aspects of industrial arts.

We know that God the Creator created other creatures in his creation that have the power to create and to procreate and even to enjoy recreation. (Did you notice the seven variations on the word "create" in the previous sentence?) The infinite details of creation are truly beyond our imagination or comprehension.A bird's nest, for example, is an amazing creation in the animal world, and the fact that birds know how to build the different nests known to various regions, resources, and types of birds is a fascinating study all its own. The ability to paint a picture of such a nest, however, or to write a poem or symphony about it... or to use that nest as an understood metaphor in language is a god-like level of creativity and communication unique to those created "in the image of God." It is in that sense that human creativity is more profound than the miracle of a bird knowing how to build a nest (having never been "taught" to do so).

Understanding this attribute of Imago Dei brings greater appreciation for human creativity wherever we see it expressed. For instance, when a student gets an idea in art class for a drawing, his or her ability to render the finished product is only part of talent involved. The idea, the concept, the notion of creating a picture that is worth a thousand words and having the urge to bring it from the mind to a chosen medium is in and of itself an attribute of Imago Dei. The process of rendering an abstract concept into a representative reality is a small reflection of God's creative process.

Back in March at our "Open House," we displayed dozens of examples of student artwork on the walls--each with merits of its own--but in light of this unique year in the history of CCS, and in light of the extraordinary story of God's provision this year at so many levels of our program, I trust you won't mind if I focus on just one of those student works. Please take a moment to look at this drawing by Ally Richards before reading the remainder of these thoughts.. 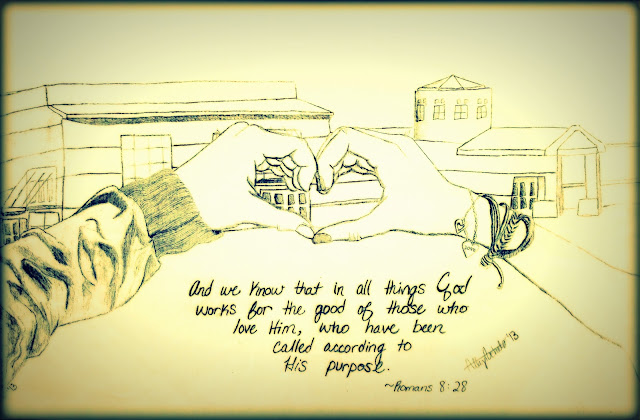 Perhaps the first thing you saw was the heart-shape in the center of the picture. It's formed by two hands positioned basically at the center (or "heart") of our CCS building. They are young hands, student hands. Several details indicate that this is the left hand of a boy and the right hand of a girl.  The two hands are "working together" to form the heart just above the text of  Romans 8:28, and perhaps the most commonly used translation of that verse begins with "And we know that all things work together for good..." The hands themselves are working together to form the universal symbol of affection. In this case the affection is not necessarily between the two students--the "heart" depicts the feelings that the students have for their school.

I have not talked with Ally about this drawing to confirm if I have noticed every detail, but that is the nature of art, and poetry, and music. The eyes and ears that process the created work never really stop bringing fuller meaning to it.

I think it is safe to say, that the CCS family does not "love" the bricks and mortar and carpet and tile of this building, but architecture is also one of the human arts. In fact, making the form of a building complement its function is both an art and a science. A restaurant, a lumber yard, a bowling alley, a church, a house, a mall, a grocery store, a medical center... we see such buildings serving their designed purposes every day, and while it is possible for buildings to be modified for various uses as needs change, school buildings themselves are highly regulated with codes and zoning considerations. They are unique buildings serving unique needs.

From kindergarten through 12th grade, the average student spends over 16,000 hours in their school--second only to the hours spent in their home. So it is understandable that over time, such space becomes familiar and the surroundings become inseparable from the people and experiences that we associate with our years at school. As Edgar A. Guest put it years ago, "It takes a heap of livin' to make a house a home." The same is true for any building.

It is in that sense we consider the building in the background of Ally's drawing a place we love, a place we call home, a place in which hundreds of people have learned to work together and hold together through the most formative (and sometimes the most uncertain) times of our lives. This year has taught us that, and we commit ourselves to this cause indefinitely: to love God and pursue His purpose for our lives.

Photography is another form of art and I'll close these thoughts with a picture that a parent took one morning last fall after a storm had passed our school. It is worth a thousand words... so I'll be silent. 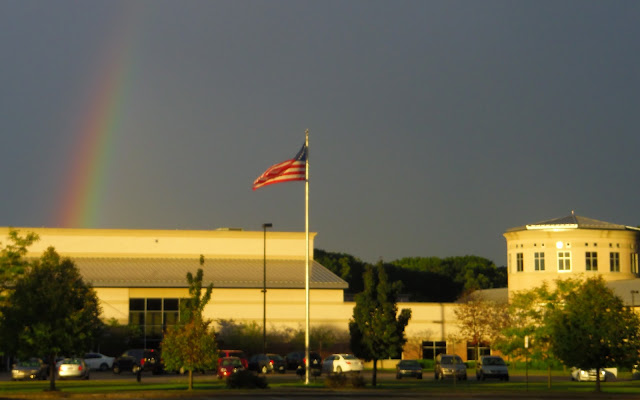