Thoughts on a Frayed Rope...

It was perhaps the windiest day of this record-setting spring as a wide-spread storm swept into Michigan from the plains. In Nebraska, twenty train cars had been blown off the tracks. Here in Michigan, on their way to school, students had seen fallen trees and limbs in the road. The large flat surface of the twenty-foot CALVARY sign at the main entrance was undulating like a musical saw in the relentless 40-50 MPH gusts.


Sometime in the early morning of April 10, one of those gusts snapped the 70-foot nylon rope that holds our flag on the tall aluminum pole in front of the school. No one saw it happen; they only saw the line and Old Glory strewn in a tangled mess below. This old rope that had weathered 14 winters since the building was completed in 1999. During all those years, it had held over twenty different U.S. flags, replaced routinely through the years, but the rope itself was the same. Mostly the same, that is. Not all of it was worn, but there were weak spots at friction points, and the strenuous winds of this day were too much for one of those unnoticed frays in the old line.
Craig Morton, CCS parent and member of our armed forces, was doing some volunteer tasks around the building that day when he saw the fallen flag. He retrieved it, observing proper protocol, and offered to bring a boom-truck to restring a new rope the following Saturday. 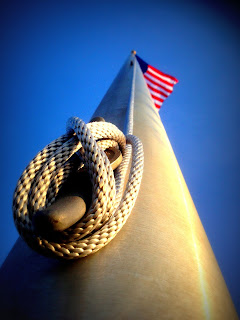 Mrs. Becky Smith, mother of purple-heart Marine, Jared Smith (CCS Class of 2002), is our own in-house Betsy Ross. She loves to sew and took the flag home to make sure it was clean, repaired and ready to fly again.
Mrs. Deb Stenberg, staff sponsor of the National Honor Society, learned of the need for a new rope and thought this might make a good NHS project. She called her husband who works in the shipping industry. He introduced us to AAA Sling & Industrial Supply, Inc. of Grand Rapids, supplier of ropes for the flagpoles and ships down at the Muskegon docks. Not only did AAA Sling & Industrial Supply donate a new nylon rope to CCS, they also sent a steeple-jack to climb the pole (without a lift) and restring the new 75-foot rope through the top pulley about 40 feet above the ground. (We wish we had pictures of the steeple-jack’s brave feat, but it was done after school when no one saw.) 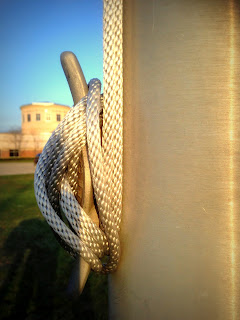 It is easy to take for granted things like poles and ropes and flags, and we never really think about the work it takes to fly a flag. Worse yet, we sometimes forget the risk, courage, sacrifice and freedom the flag represents. The years pass, the flag waves and weathers the storms; we are safe in our homes and churches and schools, and we are lulled into false security until unseen forces find our weak points, cause a line to break, and lives or treasured things are strewn on the ground. Whether its Boston or Benghazi we grieve when the worn lines snap, but we must never be afraid to fix what is frayed and hold high the ideals we share under God.
Our thanks to all who helped raise our building's flag again. May we never forget the true cost of the freedom it represents, the Father who grants us that freedom... and the Son through whom we are made free indeed. (John 8:36)
Posted by .Tom Kapanka at 3:11 PM