I have been teaching British Literature to our 11th and 12th grade the past four weeks. In my early teaching career, I taught British Literature for 15 consecutive years, and this was my first extended teaching experience in equally as many years.  I have really enjoyed it, and half-suspect the students did, too. Last week, as a segue between Shakespeare and Golding,  I used the following poem to introduce the concept of man's fallen nature befoe beginning Lord of the Flies.

This post will be on top here at "To Begin With" for a few weeks in hopes that you may find a variety of thoughts in the links (click on red text words) below the poem appropriate for this Lenten Season. 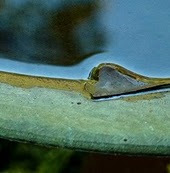 The first green thing
I saw that spring
was not a hyssop sprig,
not a trillium leaf along the trail,
nor the bourgeoning twig
of ivy on a crossed split rail.
No, before I’d seen a

sign of things to come along the path,
I saw the green patina
of an artisan’s birdbath
wrought in copper and bronze,
beautifully cast and crafted together
and left to age as such responds
to air and time and weather.

It was meant for a garden, no doubt,
but was now cast off and left out
where wooded rains o'erflowed beneath
to its streaked and verdant stand.
The basin was a laurel wreath
held high in a triumphant hand;
the base a sinnewed arm trapped
in the earth and further bound by a briar
that rose from the soil, wrapped
around the outstretched limb and higher 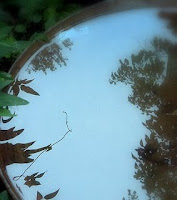 as if to draw the eye
to things above and intertwine
the bowl's reflection of the sky
and laurel wreath in its thorny vine.
This overgrown and tarnished glory
seemed the preface to a story
told without a word...
and forever fixed in time.
For when my curious fingers stirred
the water, I felt the stagnant slime
hid just below the rippling blue.
And wafting from a putrid maché
of blackened leaves and acorns split in two
came the septic stench of sewage and decay,
this the incense offered by the brazen hand 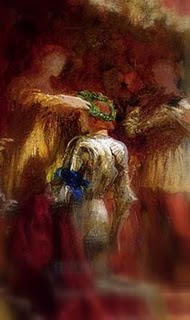 If I were a sculptor, I’d like to make a birdbath like the one I attempt to depict in this poem. I'd cast a strong arm in bronze that rises from the ground holding a laurel wreath as if it were being placed on the head of the person looking in the water’s reflection. And then, if natural thorns did not grow to ensnare my work, I would craft a vine of thorns to do as those in the poem did so that, rather than man's praise around the onlooker's head, he would see something more like a crown of thorns.
Since ancient times, long before the time of Christ, the laurel wreath was the traditional prize for athletic victors. It was also worn by people in power like Caesar and members of the Roman Senate. Using a natural plant to make a crown was a well-known practice in the time of Christ, which is why I think planting the crown of thorns on our Savior’s head was much more than a brutal act; it was meant to be a mockery. (As depicted in the 14th Century woodcarving below.) Little did the brutes know that the thorns, being a result and symbol of Eden's curse, only added to the full meaning of the cross. Christ who knew no sin bore the curse for us. "Cursed is He who hangs upon a tree." 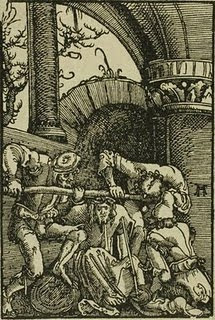 Just as the laurel wreath suggested honor, the crown of thorns was  as shameful in meaning as it was painful to the brow. That is why the image in the poem allows the thorns to overtake the wreath. Man’s image of himself is one of strength and self-determination, like the sinnewed arm raised high in victory, but in truth, fallen man is more worthy of thorns than laurel wreaths. In contrast to the practice of the incense offering, the prophet  Isaiah 64:6 reminds us that our sin makes whatever self-righteousness we "offer" to God akin to filthy rags; left to our own merits, our fate is shared with fallen leaves. The apostle Paul speaks of man's proud works as smelly rubbish.
All around we see both beauty and brokenness. We are blessed to see God's creation but cursed to know it is not as it once was. In the still water of this imaginary birdbath, for instance, we briefly see the sky, but just an inch below its reflection is the stench of rotting leaves and seeds left over from the fall. This image is very real to me.
In our backyard, we have a birdbath and other small fountains, and often in the spring when I go to clean out all the junk that fell in them before winter, there is a smell much like the smell of sewage that comes from the decay in the shallow water. By then, whatever leaves gathered there are not colorful like the ones in the picture below but blackened and matted together. Those are maple leaves, but we also have huge oaks in our yard, and the squirrels break the acorns and drop them below to mix in with all the other rotting things. 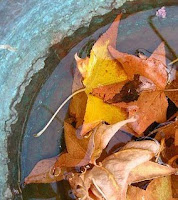 “The cold and rotting remnants of the fall,” however, is not referring to the season of autumn but rather the fall of man. As beautiful as the reflection of the sky is, as wondrous as the hope of things to come may be, there is that decay of death just below the surface; there are those thorns strangling out the glory that was meant to be.
There lies the beauty of spring that comes with Easter. The hyssop sprigs eventually show; the trilliums begin to grow, and all the beauty that was Eden surrounds us in signs of life along the path. The first green things appeared in a perfect place, Eden, and likewise the green thing I saw in the poem, though of man’s making, "was meant for a garden, no doubt, but now cast off and left out." True, it was green, but the patina that comes from the oxidation of copper and bronze is a muted hue compared to the first green things of creation. And what were some of those green things mentioned? 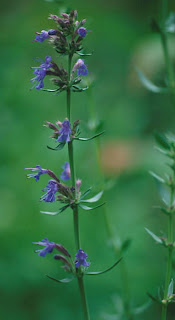 The hyssop is native to eastern Mediterranean lands but was purposely brought to the western continents where it now flourishes. Along with the laurel, its meaning and many uses have been known since ancient times. Psalm 51:7 says, “Purge me with hyssop, and I shall be clean: wash me, and I shall be whiter than snow.”

Hyssop is known for its cleansing power and ritual use. It is also aromatic—in the mint family. The Gospel of John says that it was on a long woody stem of hyssop that the soldier offered wine vinegar to Christ at his crucifixion when he said “I thirst.” I do not now why that detail is mentioned. It may have been additional mockery by those who had just pronounced him "King of the Jews," but regardless of the motive, the use of hyssop made a vivid link between the first Passover and the ultimate sacrificial moment in history.
.

The trillium grows across North America, it was popularly voted the state wild flower of Michigan (but Lansing overruled). It is known for its mathematical design of displaying three leaves, three sepals, and three petals, all of which have been used in Christian circles as a picture of the mystery of the Trinity—Father, Son, and Holy Spirit—united in  purpose though distinct in personality. It is in the lily family (tri=three lily), a perennial that bursts from the ground and shows leaf each year around Easter (but typically blooms in late April and May). Sometimes called a "wake-robin," the trillium flower was used by Native Americans as an antiseptic. This flower is also called birthroot based on other medicinal uses.
Ivy is a non-deciduous evergreen plant. We typically think of Christmas trees and conifers as evergreens, but holly and ivy and many other plants remain green year-round; they do not lose their leaves in the fall and thereby show the continuity of life in spite of all that changes around them. Ivy survives the harsh winter and resumes its spreading, clinging coverage on stationary things in the spring and summer. We have some split rail fence covered in ivy in our yard, but I included it to evoke the image of hewn wood as is also true of the cross.

Thus in the opening stanza, the brief mention of these green things—the hyssop, trillium, and ivy—(yet unseen along the path) foreshadow the significance of "the first green thing" I did see: the patina of the copper birdbath with its stench of the rotting leaves. The story may be "forever fixed in time," but it is corrected when time as we know it is no more. Ending as it does, the poem gives hope that, for those who believe, the green things foreshadowed in the beginning—cleansing hyssop, the covering ivy, and the symbolic trillium—will triumph over the remnants of the fall.
Posted by .Tom Kapanka at 8:17 PM