What a Wonderful Christmas Concert

A friend of mine sent me this picture from his camera-phone tonight. It does not include the full section to the right of the stage. It was a full-house, and a wonderful concert that reflected the joy and meaning of  Christmas.  We had to set up an additional 100 chairs, and there still dozens of people standing along the back wall and entrances.

The bands and choirs of all ages did an outstanding job. I must admit, my eyes watered at the last song, when after singing "Silent Night" as a congregation along with nearly 80 MS and HS students who were also singing in sign language, the choir signed the last verse again in a room so quiet it brought new meaning to the last line "...sleep in heavenly peace."  Well done, Students! Well done, Teachers and all who made tonight possible!
One of the most wonderful things about this event is that there are always hundreds of grandparents in attendance. I met several for the first time. I also met a grandmother whose husband was on the school board when I first came to CCS back in 2000. I visited with a grandmother who served on the school board for several years. Earlier today, she was wrapping Christmas presents at the bazaar. This afternoon, I visited with a grandfather who came to the rehearsal because he could not be at the concert tonight. After the concert,  I met a grandfather who drove up from Indiana. He and a number of other grandparents stopped me to specifically say they are praying for Calvary Christian Schools and that they're so glad this school is here for their family.
In a few days, my own family will be with grandparents in Kansas (Julie's parents), and I can't tell you what a blessing they have been in our lives. I'm looking forward to being with them.
If you read this post over the holidays, and if you're visiting with the grandparents in you life, please share the following poem with them, and please let them know we appreciate the vital role they play in our student's lives.
Three Generations 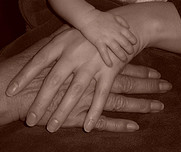 It takes two generations
to bring along the third
for the echo of truth
is sometimes heard
more clearly than
the words first spoken.
A cord of three strands
is less likely broken
than one or two,
and perhaps equally strong

is a chord of voices
intent to pass along
what matters most
from age to age.
The older voice can gently lead
and help confirm the page
the father reads
is worth the ink
and worthy indeed 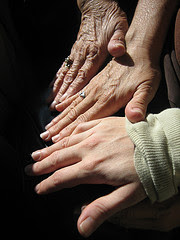 to make man think
beyond his lifetime.
The family tree, it’s true, will grow
new limbs and leaves of green,
but the aging trunk that holds them
is held by roots unseen.
Some say "it takes a village,"
but more often than is heard,
it takes two generations
to bring along the third.
© 2007 Tom Kapanka
.
.
Posted by .Tom Kapanka at 12:15 AM