This week we hosted a Scholastic Book Fair at school. As is always the case when a Christian school introduces secular materials, there are many, many titles that our volunteers pull from the sales racks and tables. I love books about God's creation--animals, plants, mountains, planets--they just amaze me. In fact, the older I get the more amazed I am by God's design all around us.

Unfortunately, secular books superbly capture all the beauty and grandeur of creation while completely eliminating God's role in it all--wrapping all the wonder in millions and billions of years rather than the in Creator of Time. This is true in most museums as well. 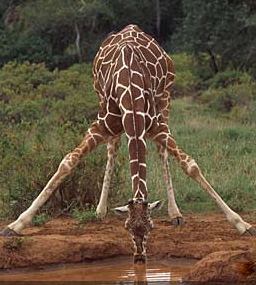 Several years ago in a museum, I saw a display of a giraffe (real but stuffed) drinking from a pond like the one in this picture. The plaque beside this huge specimen said something like, "Over millions of years the giraffe evolved a series of valves in his neck veins that allow him to put his head below his body without fainting each time he drinks. He also evolved the ability to swallow water up its steep eight-foot neck. Had these two evolutionary steps not occurred, this species of animal would have died millions of years ago." Likewise, this website says, "
"Luckily, giraffes have elastic blood vessels in their necks, this makes it possible for them to drink water from a stream, without fainting." Luckily? Really? Luckily? The giraffe is an amazing enough creature to look at let alone thinking of the design required to keep the blood from his head as it changes from highest point of his 18-foot frame to below his feet in split seconds.

It would almost be funny if it weren't so sad. No matter how obviously creation points to incomprehensible INTELLIGENT DESIGN, some folks would rather use this absurd scientific formula: RC + BY=UFB...Random chance plus billions of years equals unfathomable function and beauty.

This wrong choice is part of fallen human nature, because the alternative brings us face to face with the Creator of the universe. When the psalmist says that we are fearfully and wonderfully made, I believe he's referring to the same "fear" that is the beginning of wisdom; it is a life-changing glimpse of the chasm between the creature and the Creator, a glance from a bowed head and grateful heart at the cost He paid to close that gap.

It is a kind of fear to be overwhelmed by awe (hence the word awful). So natural man rejects that proposition, rejects the voice of creation itself that turns our heads and hearts to God, and he instead puts his faith in RC + BY=UFB.  That is the thought behind this short piece I wrote four years ago. 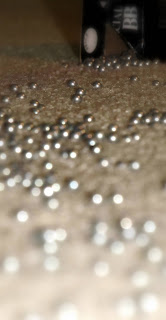 So this is what
we're to believe:
That BANG! the box of BB's spilled
with no purpose, no design,
and nothing unfulfilled.
That WE ARE trumps I AM;
and PERCHANCE trumps what's WILLED.
We must put our trust
in rocks and dust since
life is just
a box of BB's spilled.
.© Copyright 2007, Tom Kapanka

To fully understand those lines we must read "between the lines." We must understand that "just" can be an adverb meaning "simply this and nothing more" or it can be an adjective meaning "morally and unwaveringly fair, good and true to promise." This adjective sense reflects an attribute of God; the adverb sense reflects human perspective, hence the line six contrast between "we are" (human proclamation) and "I AM" (God). "Willed" reflects God; "perchance" reflects life as if he does not exist. I can't imagine living life as if that were true, and though I do not know the answers to all of life's questions,  that is the essence of WONDER, which is the subject of next week's post here at To Begin With...
Posted by .Tom Kapanka at 5:19 PM