"The Little Boy"
A Story of Childhood Creativity

Twenty years ago, long before digital cameras and Youtube, a friend of mine in Iowa gave me a copy of simple but powerful piece by Helen Buckley called “The Little Boy.”

It had been published in School Arts Magazine in October 1961, the year I entered kindergarten, but that was thirty years before and even while earning my teaching degree, I had never come across the piece until Kirk gave it to me.  A year later, Kirk's wife Joan was taking a college class on teaching methods and asked  if I would help her film a dramatization of Buckley’s simple story. She had no video equipment, no editing equipment, etc. but she was willing to line up the cast of characters if I would help her shoot, edit, and narrate the film. My daughter Emily (age six at the time, now 26) was in the cast, so how could I refuse?

Joan got an “A” on the project, and the professor used the video in that class for many years--not because my video work was particularly good... but because the lesson is something all teachers should be required to learn early in their careers.

A few days ago, I found the old VHS videotape, and I must say the words hit me as hard as the first time I read them. I’m posting it  in hopes of helping teachers remember the essence of childhood, creativity, and the power of a blank slate.

It's on summer days I'm most aware of what children are at risk to lose when life is too structured, too dictated from above (or worse yet, for today's youth...played out on a video screen). Three years ago I wrote the following and posted it here at POI.

There Was A Time 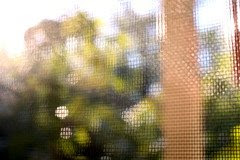 There was a time--
was there a time, O my!--
when days dawned blank
and yawning to the sky
we flung the sheets
and sprung from beds
pulled the blankets "made"
and pushed our waking heads
through wadded shirts
yanked off the night before
did up our trousers
running out the door
and leapt barefoot, impetuous,
from porch shade to the sun
arms outstretched
to wrap around another day begun.
© Copyright ,2008, Tom Kapanka, Patterns of Ink