Those three words, “to begin with,” carry weight. They declare a foundational premise, implying that we must first understand the premise or the rest of the explanation will not make sense. Worse yet, if we ignore the premise we will embrace an alternate "sense" which will lead to nonsense, and nonsense has victims. (I Corinthians 1:18-20)

In the case of that courtroom scene, Tom Robinson falls victim to the nonsense that comes from ignoring the words “to begin with.” 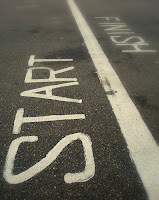 Beyond chronology, however, the opening verse of Genesis implies a premise, a foundational truth supporting all other truth. It not only declares the when of creation, it also declares the who, as if to say: “To begin with, [or “understand this first,” most importantly,” “make no mistake,”…] it was the Creator God who set all things in motion. He built the stage, placed the scenery, set the lights, cast the characters, and wrote the plot. He alone is the producer and director of everything that happens on the stage. Remember this premise, and the plot will make sense; ignore it, and fall victim to endless variations of nonsense before all is said and done.”

This blog is called “To Begin With” because the essays, anecdotes, poems, etc. posted here each week will reflect the foundational worldview of Christian education. I hope these gathering thoughts will illustrate that the partnership between homes, churches, and the Christian school is the ideal way for instruction to begin and that a foundational K-12 education sets the stage for God-honoring lives of service. In other words...

To begin with, Christian education provides a foundation to begin with.

Check here every week or so for a new post, and feel free to join in the dialogue if any in the comment section.