The two previous  posts, "The Waiting Room of Mercy" and "The Rhythm" are the context of these thoughts.

Christmas Break 2018 officially begins at the end of tonight's concert, but a different cause for celebration has been in the air all week. While the bazaar with all its secret shopping and gift wrapping was happening in the main foyer, a quieter kind of enterprise was happening in the preschool room where the Senior Worldview Class had temporarily set up shop. 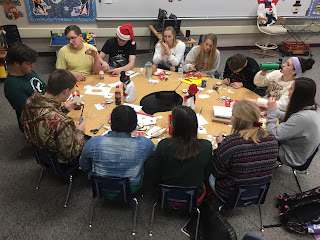 Just days ago these students and hundreds of others were praying fervently that their friend would not die as he lay motionless on our gymnasium floor with no heartbeat or breath (Vfib cardiac arrest). A defibrillator corrected the heart failure and a ventilator forced air in his lungs as the ambulance rushed him to Mercy.

It was a grave situation. Read Wednesday's reports on Luke here:

So what is the best use of instructional time on the heels of such an ordeal? Even though miraculously good news had come sooner than expected, their teacher, Mrs. Julie Kapanka, knew that a hands-on diversion would be better than jumping right back into last week's lesson plans. 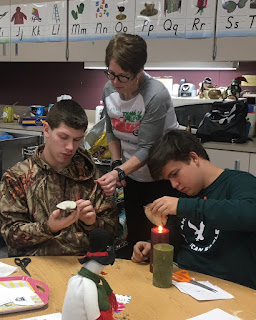 "We're going to make something that will remind you of what God did this Christmas. Years from now, you'll see this and know it's not just an ornament. You'll remember the miracle of Luke 2 and Luke, too." 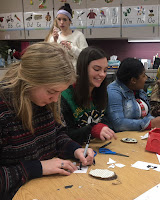 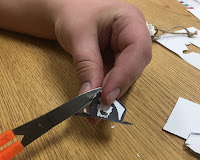 Mrs. K did not use the word "Ebenezer," but when she heard her explain the project to me I immediately thought of that word. 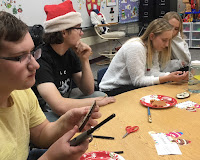 The name Ebenezer seems inseperable from Dicken's A Christmas Carol, and because of the character Ebenezer Scrooge, it often has a negative connotation. The word Ebenezer, however, is a solid stand-alone noun. It refers to a physical reminder memorializing when God divinely intervened in response to "cries" of those who call Him Lord.

The first use of Ebenezer is I Samuel 7:12, and in that case the reminder was a tall boulder. I like the way The Message puts it:
"He named it 'Ebenezer' (Rock of Help), saying, “This marks the place where God helped us.”

Keep in mind that in I Samuel 4, Israel had suffered horrible defeats and the loss of 34,000 men at that same place, and they bemoaned the fact that God abandoned them. Then in this third battle, with their backs against the wall, they begged Samuel to cry out non-stop, and God directly intervened. Does this mean that when bad things happen, God is gone and when good things happen He shows up? Or could it mean that He is not bound by human rationale. He writes the lesson plans and determines whether teachable moments come through victory or defeat; mercy or justice; healing or heartbreak.

We know God is sovereign and knows how to turn the tables on the haughty (see I Samuel 5-6) in order to honor those most dependent on Him. In the case of that first Ebenezer, he chose to dramatically respond to Samuel's obedience and effectual outcry.

In our episode last week, when the commotion and phone calls began last Thursday around 4:00, I have never known of so many people praying so fervently within minutes. The first responders were super fast, but literally hundreds if not thousands of people in inter-linking prayer chains across the country were immediately crying out, including the seniors in these pictures. 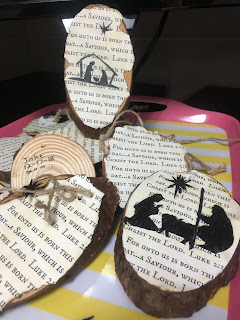 It is in that sense, that the ornaments the seniors made in Worldview class are little "Ebenezers" that will help them remember what happened this week for years to come. Don't get me wrong--I know we shouldn't dwell on the past beyond the extent to which it makes us more effective in the present. Tragic events are not easily forgotten, but ironically, when such events take a miraculous turn like the victory in I Samuel 7, they can fade as things return to normal. For that reason, all those who carry on with life need Ebenezers or reminders like tiny-stoned wedding rings, commemorative plaques, broken bread, rainbows of promise, and yes, even  ornaments depicting the nativity of Luke 2.

There is another place where we hear the word Ebenezer besides Dickens and  the Books of Samuel. It's in the great old hymn "Come Thou Fount". Those words were penned by a 22-year-old  Robert Robinson  in the year 1757. You remember the line in the second stanza, "Here I raise my Ebenezer; hither by thy help I'm come; and I hope, by thy good pleasure, safely to arrive at home."

I began writing this post at 4:30AM. I was alone in my living room. Reading on-line news articles about Luke's incident and thinking about the short attention span we humans have. Why did Samuel raise a stone to remind them how the Lord helped them win the battle? Because he knew they were humans and tend to forget, as the old gospel song says.

It was for these reasons that I woke at 4:30AM to find the word Ebenezer word in a 260-year-old hymn written by a young man not much older than Luke, but when I read the lyrics a few other lines brought tears to my eyes in light of this week's events.

1. Come, thou Fount of every blessing,
tune my heart to sing thy grace;
streams of mercy, never ceasing,
call for songs of loudest praise.
Teach me some melodious sonnet,
sung by flaming tongues above.
Praise the mount! I'm fixed upon it,
mount of thy redeeming love.

2. Here I raise my Ebenezer;
hither by thy help I'm come; [Hither means, "To this place"]
and I hope, by thy good pleasure, 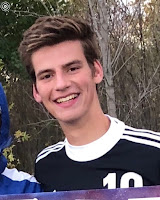 safely to arrive at home.
Jesus sought me when a stranger,
wandering from the fold of God;
he, to rescue me from danger,
interposed his precious blood.

3. O to grace how great a debtor
daily I'm constrained to be!
Let thy goodness, like a fetter,
bind my wandering heart to thee.
Prone to wander, Lord, I feel it,
prone to leave the God I love;
here's my heart, O take and seal it,
seal it for thy courts above.

[Press arrow to hear "Come Thou Fount" by Chris Rice]

I am pleased to introduce you to a new blog that Luke's mom and CCS Librarian, Sam Anhalt, just began yesterday.
Sam's blog is called, "Crazy Might Work" at this link.
I know it will become a comforting place to stay in touch with this situation so we can better pray for this dear family as they work through  the ache of joy that comes from such experiences.

Merry Christmas to you all!
Posted by .Tom Kapanka at 5:56 AM