Dropping the Blanket at Christmas Time...

"Isn't there anyone who knows what Christmas is all about?"

On December 9, 1965, I was nine years old. That Thursday night, my family sat in our little living 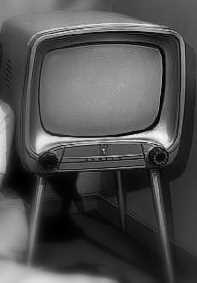 room in front of an old Admiral black-and-white TV (like the one in this photo). With a big bowl of popcorn to share, the six of us were all snuggled up to watch a Christmas special. (The show was in "color"--a fact we would not realize for another five years. I was 14 when my older brother Paul surprised our family with its first color TV, and the old black-and-white set went to the basement.)

The show we watched was an animated experiment that even the creator thought was too hastily put together. "Some of the drawing was awful," he admitted. The first hurdle was preserving the two-dimensional comic strip feel of the characters and scenes. The other challenge was assigning voices to characters that had been only imagined by millions of readers for fifteen years. But the most significant reason that airing the show was considered a huge risk for the  network (CBS), was that Charles M. Schultz (the "Charlie" behind the Charlie Brown "Peanuts" comic strip) insisted on including the reading of Luke 2 as the key element of the storyline.

Schultz refused to take out "the true meaning of Christmas" because it was the only solution to the bewildered depression that Charlie Brown mentions in the opening scene. You remember it: the kids are all skating and having fun during the melancholy song "Christmas Time is Here." The song's  words are happy but the melody is sad, which perfectly describes Charlie Brown's state of mind. (The song was written by the lead producer just days before the show aired.)

As the simple plot unfolds, things go from bad to worse for poor Charlie Brown until he finally begs aloud, "Isn't there anyone who knows what Christmas is all about?"

What follows Charlie's earnest plea is a recitation of the original Christmas story by Lucy's erudite blanket-clinging brother, Linus. This is the scene that two of the producers wanted removed, but Schultz had final say.  It was one of the reasons that many television experts pronounced the show "a flop" before it even aired.

The experts were wrong. The show was loved by my family and millions of others who had devoured "Peanuts" comic strips and the countless Charlie Brown paperbacks sold at Christian bookstores at the time.

This show and this scene has aired unchanged for 52 consecutive years, but it was not until this year that someone pointed out to me a very important detail that Schultz included in this moment:

We all know that Linus is forever attached to his iconic security blanket. He is simply terrified if he cannot hold his blanket. But... watch what Charles Schultz decided to have Linus does when he gets to part of the passage where the angel says "Fear not."  He lets go of his blanket--lets it drop to the stage as if to illustrate the complete peace bestowed by the Angel of the Lord.

This is a classic...

I thought of this scene last night at the CCS Christmas concert when our kindergarten class recited the same passage by heart. More than 700 people shared a beautiful evening with us. The program included seasonal favorites like "White Christmas" and "Sleigh Ride," of course, but the main emphasis was on songs that clearly present the true meaning of Christ's birth, including "Silent Night," which is celebrating its 200th Christmas this year, and was sung by all 700+ in the auditorium. 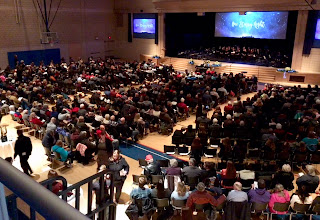 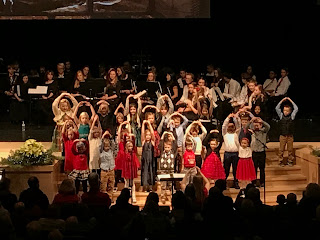 May your Christmas be filled with the security that comes from knowing the true meaning of Christmas.