As the Twig is Bent 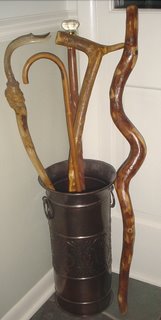 In the corner of our front entry, there's an old copper umbrella stand that holds not one umbrella but a small collection of walking sticks.

The corkscrewed stick (beside the stand in the picture) is one I started making  more than 40 years ago, though I only found it in 2006. How can that be true?

In 1970, my Dad and my brother and I were clearing trails on a large wooded acreage we would someday call home. Dad's chain saw was howling away and spewing wood chips in the air while Dave and I were hauling off wheelbarrows of cut wood to the south side of the barn.

During a break between loads, I noticed three saplings about twenty feet from the blazed trail. The trees were about six inches apart and stretched up toward the sparse sunlight of the dense woods with a few branches high overhead. For no particular reason, I decided to braid the three saplings together like rope, mindful not to uproot or break the thin trunks.

When Dad stopped to put some gas in his saw. I showed him the trees and asked if I could leave them like that or would it kill the trees.

"It won't kill them--at least not right away," he said, gripping the starter rope of his saw. "But one thing's for sure: In a few years,  you won't be able to undo them. 'As the twig is bent so grows the tree.'"

The saw started before I could ask him what he meant.
That happened more than 45 years ago, but I remember the smell of the chain- saw smoke in the air, the feel of the cold autumn day, and the sound of Dad's voice as he said the words.

I thought about those words the rest of the day. The thin trunks that were flexible enough for me to bend without breaking in 1970, would someday be impossible to straighten out. What Dad said, short of a miracle, applies to people and not just trees. It can be positive as well as negative. It is the principle behind Proverbs 22:6 "Train a child in the way he should go, and when he is old he will not turn from it." The quote itself , however, is credited to Virgil, a Roman poet from the 1st century BC. I did not know this fact in 1970. I would not know it until four decades later when the true meaning of the words finally hit home.

My father passed away in 1995. I had forgotten all about the braided trees until a few years ago when my siblings and I had to sell the land.  I went for a walk by myself, sentimental about the old trails, now overgrown from disuse, and the days when we had made them. That's when I remembered braiding the saplings all those years before, and walked to that part of the woods to see what had become of them.

When I got there, I did not see three braided trees—just one tree standing alone. The other two had long-since died and rotted away. This tree was also dead. No leaf or bark remained, but it was evidently made of stouter stuff, still fixed in every gentle twist I had imposed when both the tree and I were young. It broke with a crack from the ground, and a few years ago, I cut it to length, sanded and sealed it, and added it to my the collection. It reminds me of my father; it reminds me of what he said that day;  it reminds me that the influences that shape us when we're young remain long after they are gone.

That is why choosing the right educational setting is so important. Based on most state-required “hours of instruction,” the average student spends over 15,000 hours under the influence and supervision of school teachers during his/her K-12 education. The quantity of time at home may be greater than the time spent at school, and ideally the influence of the home is even more compelling, but imagine the educational advantage of having the school and home on the same page. Imagine students not needing to compartmentalize the lessons of life. Imagine a school setting that purposefully integrates learning with life, science with conscience, facts with faith, theory with wonder, and wonder with belief.

The faculty and staff of CCS have more than 350 collective years in K-12 Christian education--250 of those years are right here at CCS. It is our pleasure to partner with Christian homes during these tender, formative years.