It was Christmas Break, and a dozen volunteers and I were in the building working on the “Under One Roof” project. I was looking for a roll of duct tape in a large box that has been in the corner of my office since mid-August when we moved back into our building. Along with the tape, I found an object wrapped in paper towels with a rubber band around it. I studied the thing in disbelief—not wondering what it was but amazed that half-a-year had passed since I’d last seen it.

Just a few weeks before that date, all the teachers had been asked to turn in their keys and remove their classroom belongings by June 20th. With the help of dozens of parents and students, the classrooms were empty and four storage units a half-mile away were packed from floor to ceiling. The task took three days, but we met the stated deadline, and we were trusting God to direct our path between then and September. There is no earthly way to explain the peace and good spirit that the staff had as we stepped into the summer of 2012, but never did we better understand  I Peter 5:7, "Casting all your care upon him; for he careth for you."  I will admit, however, that the school was sadly quiet for the next nine days as the office staff packed and wrapped up the loose ends of the 2011-2012 school year.

On that last business day of the school’s fiscal year, Friday, June 29th, the office staff had offered to stay and help me pack what little remained, but I assured them I was almost done and could roll out my last boxes on a kitchen cart. That final hour was quiet until the custodian stepped in to remind me he was scheduled to lock up and code out at 6:00. He and I were the last to leave the building that night, and it felt strange not knowing when or whether ever I would return.

That’s how I remember what time it was when I wrapped the thing in paper towels. That’s how I knew it had been a half-a-year since I had seen it. 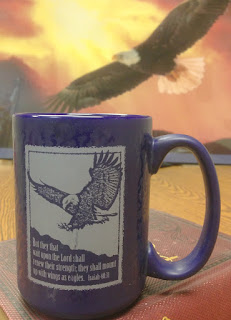 The six months seemed a blur until I pulled off the paper towels and stared down at my found treasure. It was the blue coffee mug I used for more than 4,500 days since my first week at Calvary Christian Schools in July of 2000.

My wife  Julie bought it for me the week we moved to Michigan. One glance at its image and inscription and you’ll understand why she knew the then-new administrator of the Calvary Eagles needed it on his desk.


Isaiah 40:31 (ESV)
31 but they who wait for the Lord shall renew their strength;
they shall mount up with wings like eagles;
they shall run and not be weary;
they shall walk and not faint.

You all know the passage, but I’d like to share some thoughts about the first three verbs in that verse: wait, renew, and mount up. 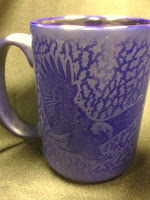 Most translations imply that waiting is active not passive; it is doing not dreaming. In this sense, we wait not like restaurant patrons waiting for their meal but like the waiter who is “waiting on” tables. This kind of waiting is about service. Believers are those who wait upon the Lord with hope and expectation that what God says He will do. It is waiting in obedience to "occupy ‘til He comes." (Luke 19:13)

The second verb is renew. The promise that our strength can be renewed implies that it can also be depleted.  The truth is serving others can be exhausting. Some may ask, "What about the promise in the second part of the verse that says, 'They shall run and not be weary; they shall walk and not faint. Doesn’t that mean that we will never get tired while serving the Lord?"  I don’t think so. Even well-trained  runners are exhausted after “pressing on toward the mark.” (Philippians 3:13-15)  I don’t think the word weary implies physical exhaustion as much as complete mental or emotional fatigue. In other words, being weary is not being tired from what you’re doing—it is being tired of what you’re doing. Weary is a dangerous place to be; it is dark and pathless valley cluttered with quit and overshadowed by the bad decisions of centuries past.

It is for this reason the Apostle Paul encourages us not to “grow weary in well doing.” (Galatians 6:9)   He is not saying “Never tire yourself for a worthy cause" but rather "Never become tired of the cause." It is healthy to be spent at the end of a hard day or a hard week. Such tiredness is to be expected in service. It is why God created the seventh day to rest.  He knows we need recovery time... renewal time. Sometimes we need a change of pace.

This pattern of work and rest, anticipation and reward, is also implied in the second part of Isaiah 40:31. If you can’t run another mile, then walk instead, but don’t stop. Don’t faint. Regroup. Refocus… ReNEW your strength... then carry on. That is what  my coffee mug says. The verse implies a pattern of exertion and renewed strength.

This brings us to the third verb of Isaiah 40:31: mount up. The female bald eagle can have a 7’ wingspan and weigh up to sixteen pounds, the maximum legal weight of a bowling ball. She can also carry over four pounds of prey in her clenched talons. Assuming that circumstances have grounded an eagle, stopped it in its tracks, the most difficult part of flight is what Isaiah calls “mounting up with wings.” The hardest part is taking off, regaining momentum.

Mounting up, and up in search of the wind or an updraft takes non-stop effort—it is more grueling than graceful. There is a big difference between “mounting up with wings” and soaring. To the observer, it’s  like the Olympic contrast between watching the 200 meter butterfly in a churning pool and a 700 ‘ ski jump from a snowy slope.

There are over 7,200 feathers on a bald eagle, the largest being those used for lift and thrust on the wings and maneuvering on the tail. Imagine the strength it takes to power those 7’ wings and raise the weight of a bowling ball to altitudes above 10,000 feet (over two miles up in the sky). Our favorite pictures of eagles show them soaring at that height. Wings outstretched in effortless flight—like that poster behind the coffee mug above or this one below.

From high in the air an eagle can swoop down at 35 MPH, and use the speed to regain its former altitude. As Newton put it,“A body in motion tends to stay in motion.” But from ground level… from a stand-still… “mounting up with wings like eagles” is hard work, but the hope of soaring gives strength to weary wings. Someday we may share more of the details of lessons learned and God's provision in those six months that my mug went missing, but for now let us take Isaiah 40:31 to heart. We have soared and will soon soar again, but for six months we have been in the hard-work phase. Never have so many supporters been doing so much for Calvary Christian Schools. We are waiting on the Lord, but not idly waiting. We are fully occupied, serving Him with hope and anticipation. We will not grow weary of the effort but when we need to catch our breath,  we will change our pace, renew our strength, and not faint. We will press upward toward our high calling and will give Him the glory when in HIs time we soar.

With that in mind, let us turn our thoughts from the little mug on my desk toward much bigger things.

On behalf of the School Board, staff,  consultants and many supporters now assisting CCS, allow me to give you a sneak preview of  a billboard that you will soon see at two locations on the main highways near our school: